This is the story of Lee Abbey’s House and estate, as far as we know it. The land and buildings have seen a lot of events over the years, not least since 1946 when the current Community-run retreat and holiday centre was founded. 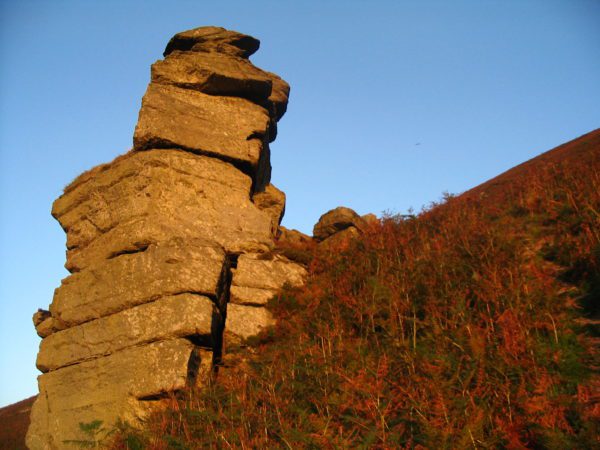 From the Stone Age, farmers and cattle raisers have been living on Exmoor.

Farm settlers arrived from Brittany and started developing the more fertile parts of the moor. You can still see some of the stones from their castles, camps and stone circles in Lynton and the Valley of Rocks today.

With the Saxons Christianity came to Britain, as the North Devon coast was raided by the Danes. Saxon manors appeared at Lynton and Countisbury.

Henry de Tracey, a Norman knight, gave the manors to the Cistercian Abbots of Forde Abbey in Dorset and they held the land for about 340 years, possibly building a farmhouse where Lee Abbey now is. 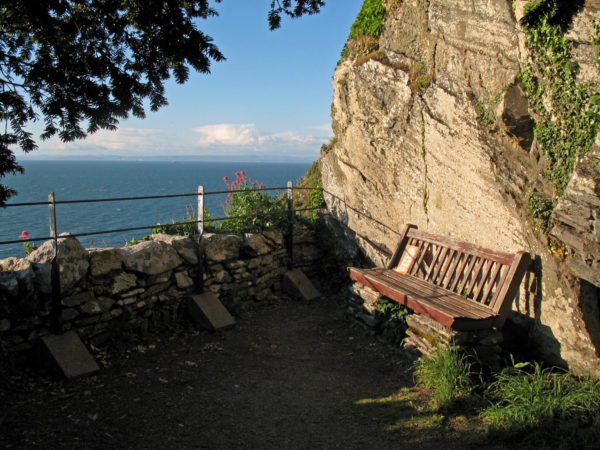 The land was now in the hands of a certain Hugh de Wichehalse (what a name!) who came to escape the Barnstaple Plague, and he repaired and enlarged the farmhouse at Ley. Legend has it that Jennefried, the heiress to Lee Manor, was due to marry here until, on her wedding day, she discovered that her faithless lover had married another. Through the night she wandered in grief, and when dawn came, her body was found by the waters edge.

After 1713 the Wichehalses couldn’t afford Lee Manor any more, and it changed owners again. In 1785, when Lee and North Grounds belonged to a John Clarke, there was a huge landslide and half of it (all right, 9 acres of it) fell into the sea. You can still see the spot where this happened. 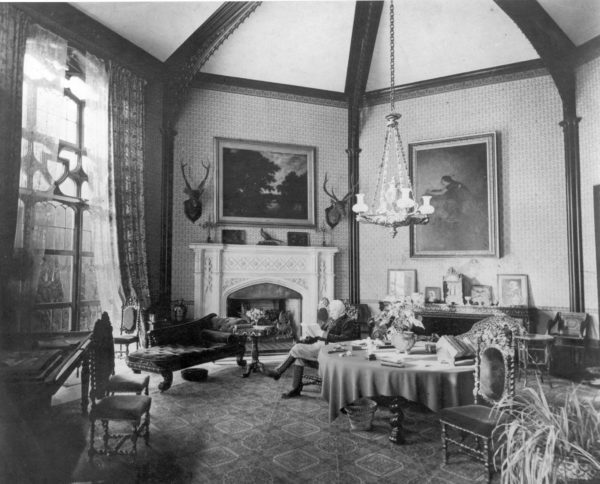 By now, Ley and North Grounds were Mr. Bailey’s, and Lee Abbey as we know it today was built. Gothic style was definitely in fashion, and the House was just the ticket. Where the Dining Room is now there was a huge conservatory, and the Octagonal Lounge was the music room. Squire Bailey himself carved some of the wood in the Library and Small Lounge fireplaces. He was also responsible for planting a lot of the trees and creating many of the paths you see here today.

Two companies bought Lee Abbey and tried to run it as a hotel, building many bedrooms and two golf courses. Both of them went bankrupt, war broke out, and there was just no market for a remotely located, expensive golfing hotel here.

At this point it was time for another change, and Lee Abbey became the new location for an evacuated boys’ school. As far as we know, there’s nothing left from them in the place …

The beginning of the faith adventure 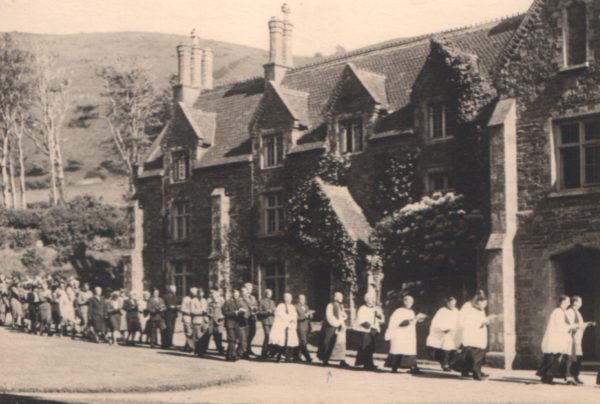 A group of people, who had run house parties in Lee Abbey during the holidays in the war, put in an offer to purchase Lee Abbey when it came on the market in 1945, even though they had no money for the deposit at the time of signing.

It was a neglected building that they obtained in 1945, and it took a huge amount of work to prepare it to receive the first guests by 1 June 1946. It was officially opened and dedicated to God on 5 June by the Bishop of Exeter. Since 1946 to today, Lee Abbey has been run by a Christian Community living and working here.

By removing walls and ceilings from three bedrooms, a Chapel was made in the north of the House. Its first service was Holy Communion on Easter Day 1951.

Lee Abbey just kept growing. We built new community accommodation with the Annexes and Garden Lodge in 1955, a house to take the diesel generator in 1958, more bungalows for married community in 1959, and Tower Lodge in 1960. Lee Cottage become ours in 1961, and more single rooms for community men were built in 1966. Finally, by 1967 we had mains electricity. 1968 saw more new guest rooms, and the laundry and playroom. In 1969 more single rooms were added in the garage under the flat. The Kitchen as we know it appeared in 1974, and the Dining Room grew as well! 1978 brought us a new farm, a thanksgiving gift by an anonymous donor, and a Community kitchen, lounge and TV room. On 6 June 1983, Lee Abbey’s 37th anniversary, the Archbishop of Canterbury opened the Preston Room, a new conference room opposite Reception. 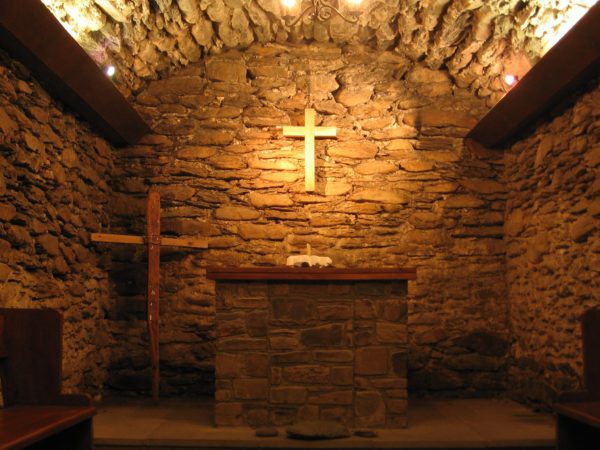 In a lime storehouse next to the lime kilns beneath the Beach Chalet, Ley Chapel (or the Beach Chapel) was opened by Denis Wakeling, then Chairman of the Lee Abbey Council and Bishop of Southwell.

After this, building carried on, with ‘The Moos’ created as accommodation for Community, and a lift put into the House. 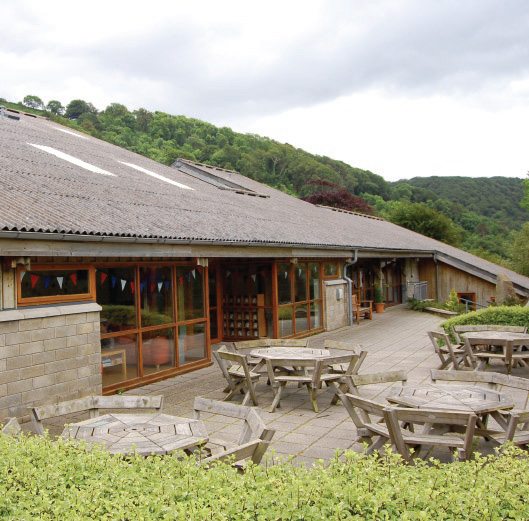 Lee Abbey’s largest new venture, The Beacon Youth & Outdoor Activity Centre, opened in May 2004. Using the shell of the old dairy barn, this facility harnesses the unique location for a completely new purpose, namely activity holidays for not-necessarily-Christian groups of young people. With the Beacon, Lee Abbey is once again taking a bold step of faith in a new direction.

A new Youth and Children’s Suite of rooms and facilities was opened as part of the ‘Towards Tomorrow’ project, and has provided a great base for activities since then. The team now also works closely with the Beacon to offer the best of both to as many as possible.

A much-needed upgrade to a whole block of Community rooms was completed at the Moos, providing capacity and good quality rooms for those who volunteer their time at Lee Abbey.

Long-awaited by many guests, the Dining Room was finally extended and redecorated – so eating meals is now lighter, airier and less cramped than before. The Kitchen had a refit as well, with new floor, wall coverings and equipment.

The House was closed for the winter of 2015-16 for a large scale renovation which resulted in a bright new Reception area, steps removed from corridors for better wheelchair access, wide-ranging redecoration, rewiring and replumbing, and best of all — a whole host of upgraded en-suite rooms.

Today is not the end, of course, of the story of this House, this estate and most importantly the people and their God who inhabit it.