Next week, Baroness Caroline Cox, member of the House of Lords and CEO of the Humanitarian Aid Relief Trust (HART), will join us at Lee Abbey. Being tucked away in the tumbling hills of North Devon, this is quite a contrast to her trip last week, which took her to Armenia, a nation still recovering from horrendous conflict in the 90’s.

This is a place where there had been no policies designed to care for those with disabilities. And yet, she’s seen incredible examples of hope through her years of work. Her most rewarding career experiences have been through “celebrating the achievements of our partners.” 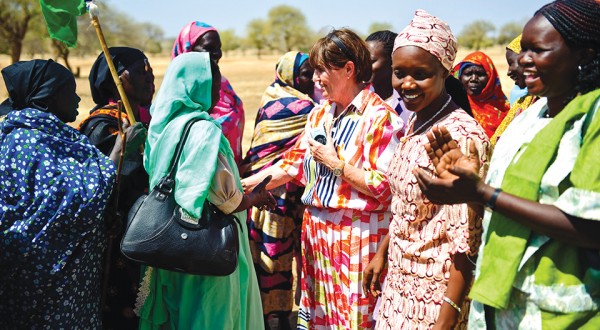 Baroness Cox in Sudan with HART

Growing up in an Anglican family and being confirmed at the age of eleven, Baroness Cox received a strong foundation of faith. It can be difficult to come to terms with suffering after witnessing blood, violence, and abuse. Even now, when faith becomes a challenge, she returns to her confirmation text, Joshua 1:9: “Have I not commanded you? Be strong and courageous. Do not be afraid; do not be discouraged, for the Lord your God will be with you wherever you go.”

Although she never planned to enter politics, the Lord took her there. One day, she was shocked after looking in the bathroom mirror to see the first baroness she’d ever met. But she accepted this as a privilege to speak on behalf of those whose voices cannot be heard.

Led by her heart, Baroness Cox has become an activist on the front lines of faith and freedom. It’s in this place that her beliefs have come under pressure, and yet, she’s pressed on for good, spending years working nationally and abroad. She’s fought particularly for the rights of Muslim women who suffer under Sharia law and its implications for marriage and divorce in England. In foreign countries, she’s worked with partners whom she sees as the “heroes and heroines of faith.” It’s these people who have become the most influential in her life—those who have courage and a commitment to love. No matter how intense their suffering becomes, they have decided never to hate. These men and women from Armenia, Burma, and Sudan are her inspiration. Their trust has been violated, but their faith sustained: “They worship with more joy than those in the comfortable Christianity of the West.”

If you don’t cross the frontier of fear, you’ll never know where God could have taken you. Baroness Cox believes that it is our role just to start walking when God opens the door in front of us. Often, this door is something we could never have imagined on our own and if we don’t go through the door, we’ll never know what ideas God had on the other side.

To Baroness Cox, God has become the “Great Coordinator”. She believes that “God doesn’t want our abilities, he wants our availabilities.” To journey with him means a readiness to leave our comfort zones, because when part of the body suffers, we all suffer. Without action, love is dead. Baroness Cox encourages us to maintain the practice of our spiritual heritage and put our faith into action.

Baroness Caroline Cox photographed for an interview with Premier Christianity