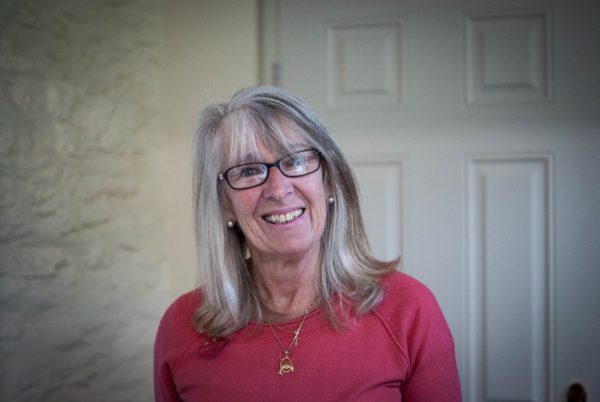 “I wrote to Lee Abbey on a scrap of a piece of paper, saying I’ve left my abusive alcoholic husband in Portugal, I don’t have any money, and a friend said it would be a good idea to come here. Within two days I had arrived at the estate.”

This is Mollie’s story of coming to Lee Abbey twenty-eight years ago. Offering a spread of cakes and scones, she currently serves nearly all her own recipes at the Lee Abbey Tea Cottage, which has been voted one of the top 100 teacottages in the UK. She leads a team of four community members from Switzerland, Spain, and Poland. Mollie works long days but with her drink of choice, “tea with honey – lots of honey,” she makes it through the day with a grin on her face.

When she first left Portugal, Mollie was not a Christian. She arrived back in the UK with two carrier bags and a pound coin. She got a hold of an old friend whose family had become Christians while Mollie lived abroad. When they picked her up, the three of them sat around a table and led her to the Lord that night. Mollie says, “I had nowhere else to go, I was totally broken.”

“I used to smoke 30 cigarettes a day and the next afternoon, I threw them away and haven’t used them since.”

She attended a church event with these friends where she heard about Lee Abbey. When the speaker offered people to come up for prayer, Mollie did so. She says, “I was fine, then suddenly the tears started coming out horizontally, I couldn’t stop crying because of all the years of pain. God not only filled me with the Spirit but he healed me from smoking. I used to smoke 30 cigarettes a day and the next afternoon, I threw them away and haven’t used them since.”

It was then that Mollie wrote Lee Abbey and was offered a lift to her first programme. She says, “I had so many questions. I had read the Bible by candlelight on a boat in Portugal, not understanding a word.” After this programme, she was asked to run the tea cottage. She decided, “I’ll stay for a couple of months,” and the Warden said, “No you won’t, you’ll come for as long as God wants you here.” Mollie then lived on community for two and a half years. Ironically, she’d written a book while abroad about a big house on a hill and a small café at the bottom. For those of you who have been to the tea cottage, this sounds quite familiar! Mollie says, “It’s it amazing how God goes before you.”

“When I left I was not the same person but I cried nearly every day. It has to come up to come out. I see myself as a survivor now.”

At this time, she met with a counsellor, with whom she prayed right through all the pain of those years of misery and abuse. She says, “When I left I was not the same person but I cried nearly every day. It has to come up to come out. I see myself as a survivor now.”

When probed, Mollie can share a lengthy list of unexpected accomplishments, including owning and training dolphins, being a milliner, and owning a jazz club. When thinking of her present team, Mollie says, “Everybody’s got a story, none of us come here without something.” She would like to help her team learn “not to leave here the same as they came, have a better understanding of the Lord, of service, more patience, and learn to see joy in every situation.” Mollie has processed many traumas in her life but she’s learned that “God is awesome, he never lets you down.”

“You’ve only got one moment and it’s now.”

When someone comes to Mollie for help, it’s usually not to ask for a recipe or to do a favour. Friends come with their pain and they share their heartache together. She has a weathered bond with many of these friends who, she says, “know everything about me and still accept me as I am.” She’s able to accept help, but also has motivation to strive into the day before her. Mollie says, “I don’t think about the future too much – I tend to live in the moment. You’ve only got one moment and it’s now.”