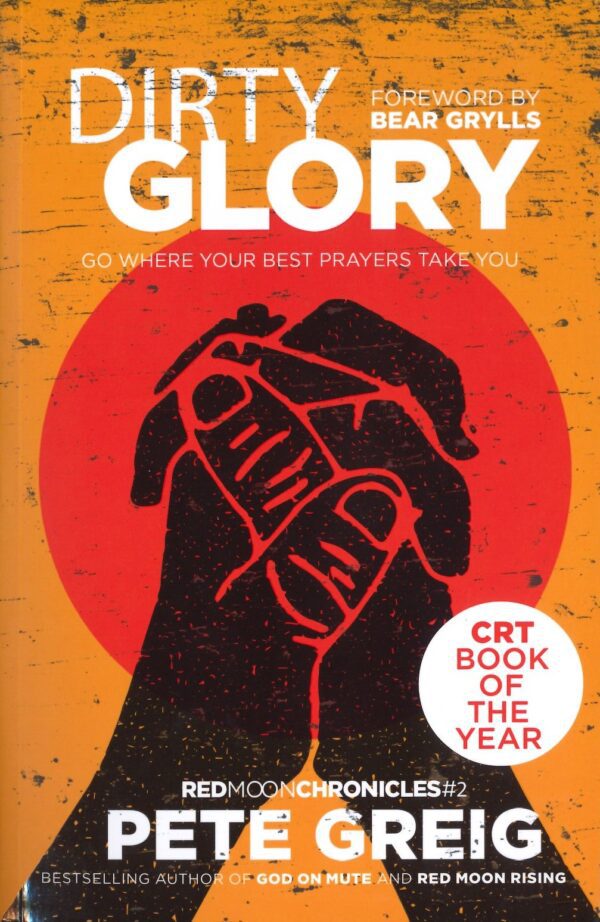 Want to really push your prayer life?
This follow-up to Red Moon Rising brings more stories of God moving today.
A challenge and an inspiration, Dirty Glory will push you to go boldly in prayer.

*CTR BOOK OF THE YEAR*

How much do we really know about prayer?

About what it is, what it does, and where it can lead us?

For years now Pete Greig has made it his cause and calling to open up prayer, and through it drastically alter what we think is possible. This is what inspired the 24-7 Prayer Movement. The idea of committing so wholly to prayer that not a single hour is left unfilled with prayer. Red Moon Rising bore witness to this movement, charting its first five years and the changes that came with total commitment to prayer.

Now, in Dirty Glory, Pete Greig deepens his exploration of prayer by looking at how encountering God through prayer, and what his presence achieves, is still the same powerful rejection of back-slapping status quo.

This is a book for the dissatisfied; those people who don’t seek change, but expect it.

These true stories of God’s phenomenal impact across the world are not just stories to give you hope. They’re there to stretch your belief in what is possible with God, to seek Glory in the ruin and rubble, and to bring action in despair.

Dirty Glory won’t inspire you to pray with comfy stories or healing, but rather show that there is only ever one response to wanting to see God move…To Pray and to Go.

ABOUT – Pete Greig
Pete Greig is the bewildered founder of the 24-7 Prayer movement which has spread into more than half the nations on earth. He is also the Senior Pastor of Emmaus Rd, Guildford, Ambassador for the NGO Tearfund, and an Associate Tutor at St Mellitus Theological College, London.

His latest book, ‘How to Pray: A Simple Guide for Normal People’ is a companion volume to The Prayer Course (www.prayercourse.org), which has been downloaded more than a million times. His previous title, ‘Dirty Glory’, was UK Christian Book of the year in 2017.

He preaches and teaches around the world and co-hosts two British festivals: Wildfires and the Big Church Day Out which attracts 30,000 people each year.

Pete Greig is a worldwide authority and the face of a generation when it comes to prayer. While you might imagine him to be puffed up, Pete Greig is entirely the opposite. He is enchanting, down-to-earth, friendly, and most of all, very normal–and yet he tells preposterous tales about prayer (and they’re true). He is basically a regular dude who loves to talk with God.

Pete’s passions include T.S. Eliot, Portsmouth F.C. and ‘Little Mo’, a 1964 Morris Minor convertible which he has lovingly restored by hand.