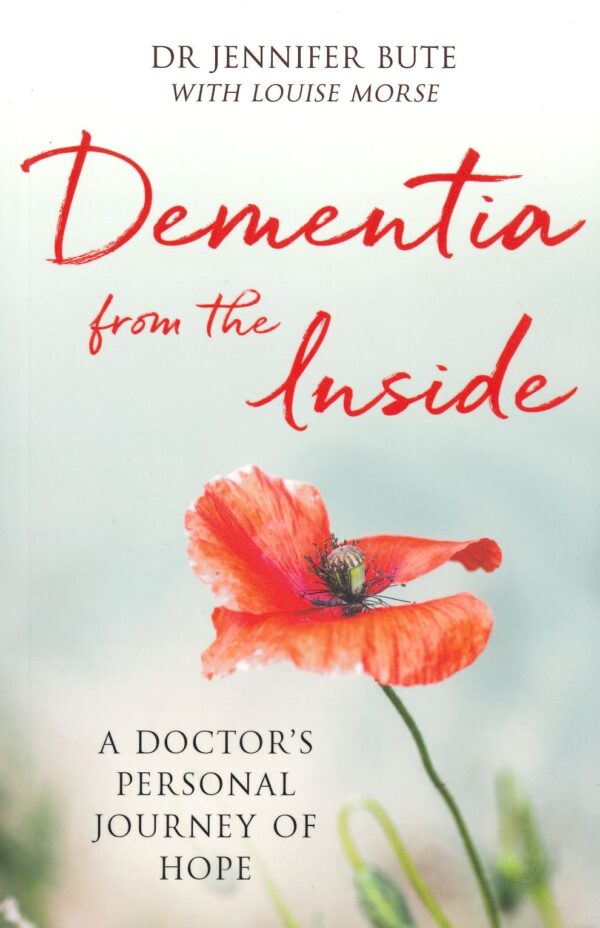 Dementia from the Inside, A doctors Personal Journey of Hope – Jennifer Bute with Louise Morse

With Dr Jennifer Bute’s back story and mini case studies throughout, Dementia from the Inside not only takes readers inside dementia, but describes, from a professional medical background, how to understand and how to help others.

‘The words ‘glorious opportunity’ and ‘dementia’ don’t sit easily together yet somehow listening to Jennifer’s story they make perfect sense. Since her diagnosis with early onset dementia a decade ago, she has given hope to thousands with the condition, and their carers, not merely by her insightful coping strategies, but by showing us a new perspective. For Jennifer, ‘glorious opportunity’ has less to do with the power of positive thinking, rather it is an expression of her faith in the power of Christ in all of life’s circumstances.’ – Chris Halls, Lecturer in Theology at Formission College and SWMTC (South West Ministry Training Course), Member of University of Exeter Multi-Faith Chaplaincy team

‘It has been a privilege to count Jennifer Bute among my friends; she is a remarkable woman and this has never been more evident than the way in which she has faced her life with young onset dementia. With self-deprecating humour, and a touching vulnerability, Jennifer tells her story in a way which will inspire and help those who are dealing with dementia themselves or in the life of others. Central to the story is Jennifer’s very practical Christian faith. She has placed her trust in God and she sees his hand at work in situations where many of us might be tempted to despair. There is an awful lot packed into a few pages.’ – Eddie Arthur is a missionary, theologian, former director of Wycliffe Bible Translators UK.

Jennifer Bute was a highly qualified senior doctor in a large clinical practice, whose patients included those with dementia. Then she began to notice symptoms in herself. She was finally given a diagnosis of Young Onset Dementia in 2009. After resigning as a GP, she resolved to explore what could be done to slow the progress of dementia. The aim of this practical book is to help people who are living with dementia and to give hope to those who are with them on the dementia journey. Jennifer believes that her dementia is an opportunity as well as a challenge. Her important insights are that the person ‘inside’ remains and can be reached, even when masked by the condition, and that spirituality rises as cognition becomes limited.

ABOUT – Dr Jennifer Bute FRGP lives in a dementia-inclusive retirement village. Previously, she worked in Africa as a missionary doctor before working as a GP for 25 years and training medical students. She retired early, as she realized that things were not right, and was diagnosed with dementia in 2009. Since then, she has devoted her time to encouraging others and challenging how people view dementia, passionately believing that more can be done to improve both the present and the future for those living with dementia. Jennifer is in demand as a public speaker at both secular and Christian events, and appears from time to time on radio and television.

Louise Morse is a cognitive behavioural therapist whose Master’s degree examined the effects on families of caring for a loved one with dementia. She is a speaker, broadcaster and writer, and researches and writes about issues relating to old age, including dementia. Louise also works in media and external relations with the Pilgrims’ Friend Society, a charity founded in 1807 to give practical and spiritual support to older people.]